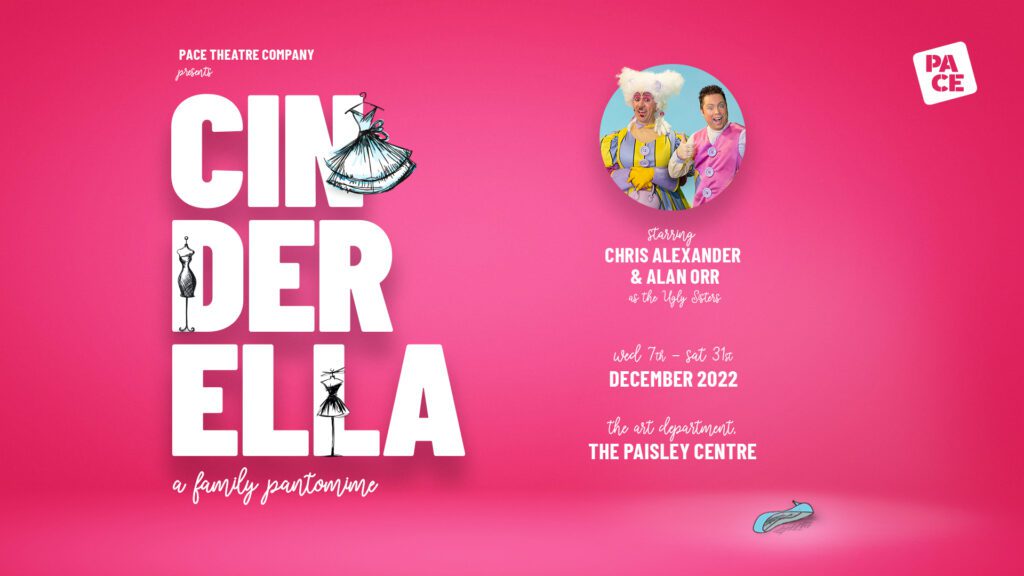 This Christmas, PACE Theatre Company is delighted to announce the return of its annual pantomime with festive favourite Cinderella.  A seasonal treat for adults and children alike, this retelling of the classic tale will run from 7 to 31 December in an exciting new pop-up theatre in a transformed former department store in the centre of Paisley.

With the traditional home of PACE’s annual panto, Paisley Art Centre, currently under refurbishment this year’s family panto will take place in The Art Department, a large scale exhibition space run by Outspoken Arts in The Paisley Centre (formerly Allders Store/Co-op).  Panto will be performed in a fully-equipped, pop-up theatre on the third floor, which will be transformed to create a unique and immersive experience from beginning to end.

Heading up a stellar ensemble cast as the Ugly Sisters are CHRIS ALEXANDER (Smile, Dundee Rep;  Martha and White, Catherine Wheels) who has been donning high heels as dame since his first appearance with PACE in 2017, and panto favourite, ALAN ORR (A New Life and Opening Time, A Play, a Pie and a Pint, The Dolls Abroad and The Dolls: Dragged Up, Scottish tour), whose comic performances have made him a favourite with panto audiences for many years.

PACE is pleased to welcome back ANDY MCGREGOR as writer; Andy is a playwright, director and composer who is particularly known for his work for family audiences, as well as recent hit productions Crocodile Rock and A New Life (A Play, a Pie and a Pint and tour) and Spuds (in association with Beacon Arts Centre). He has previously written two pantos for PACE – The Snow Queen and Lost in Pantoland.

Cinderella will be directed by DANIEL CAMERON; Daniel is a director, playwright and BAFTA Scotland award-winning actor, who is an alumnus of PACE. He trained as an actor at the Royal Conservatoire of Scotland where he played the Dame in Beauty and The Beast (2012) and is a regular lecturer at the RCS on the BA Musical Theatre programme.

Regular collaborator FRASER LAPPIN, whose previous designs for PACE include Lost in Pantoland, The Snow Queen and Jack in the Beanstalk, will bring his inimitable flair to the set and costume design. Fraser’s other recent credits include Designer for The Girls of Cartridge Hut No7 (Outspoken Arts), and Art Director for Nature+ Newsroom and Nature Zone (COP26).

The remaining professional cast will be announced shortly, and they will be supported by over 100 young actors in four teams, handpicked from PACE’s core youth theatre groups, enhancing the production with their boundless energy.

Jenni Mason, Artistic Director said, “We’re thrilled to be bringing panto back to Paisley after a hiatus, as we know that the PACE panto is something of an institution for Renfrewshire audiences at Christmas. It’s especially exciting to be further developing our pop-up space, which we piloted during our summer activities, and we can’t wait to explore the opportunities that creating a panto in a non-traditional venue presents. We’re pulling out all the stops this Christmas and are confident that there will be something for everyone to enjoy!”

With a reputation for producing some of the best family pantomimes in Scotland, regularly playing to audiences of more than 10,000 during the festive season, PACE promises a show you will never forget.

Tickets will go on sale on the following dates:
Group Bookings – Thu 25 Aug, 10am
General Bookings – Mon 29 Aug, 10am

Give a Gift That Inspires

Could you help us fundraise for Exchange? There are lots of ways you can get