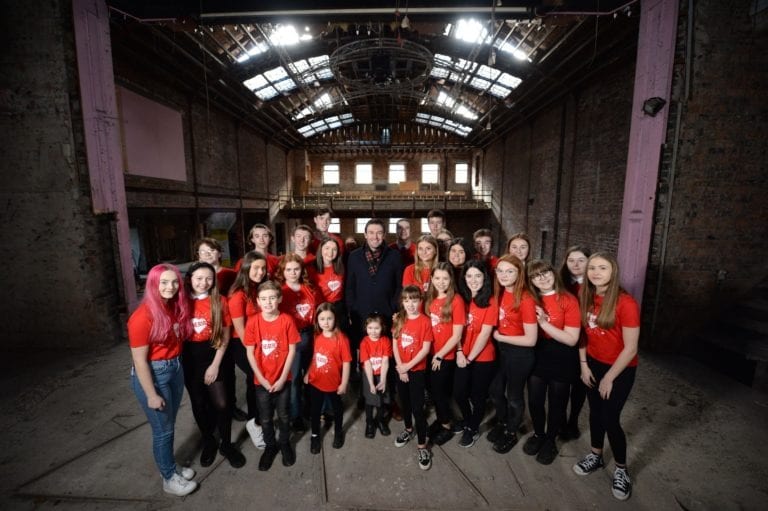 PACE Theatre Company is delighted to announce actor James McArdle as its first patron. James is a former PACE Youth Theatre member and since graduating from RADA in 2010 he has garnered a string of impressive credits including title roles in James I, Platonov and Peter Gynt at the National Theatre, a Broadway transfer of Tony Kushner’s Angels in America, and as the Earl of Moray in the 2019 feature film Mary Queen of Scots.

This announcement comes as the company reveals the location of the building which is to be transformed into a new community theatre space, EXCHANGE, dedicated to promoting and developing theatre for children, young people and families; as well as promoting participation by young people through performance and creative learning opportunities.

The vacant building on Old Sneddon St in Paisley, was most recently the site of a former nightclub (Mannequins) but was built as the New Templar Hall in 1932 and has been variously used as a dance hall, cinema and telephone exchange in its lifetime.

The building will provide a home venue for PACE’s own performances (almost 200 annually) as well as hosting a programme of professional touring productions, and offering an alternative venue for Renfrewshire’s thriving community performance scene. It’s planned flexible-use spaces will also allow for a host of creative learning opportunities.

Jenni Mason, Artistic Director of PACE, said: “We’re thrilled that James has accepted our invitation to become a patron for PACE. He has always been incredibly supportive of our work and generous with his time when it comes to our young people, and we know that his achievements to date are an inspiration to many of our young people. With the development of Exchange, our aim is to create a welcoming space for children, young people and families – from igniting a passion for theatre and performance in the very young, right through to supporting and nurturing emerging artists at the start of their careers.”

Speaking today, James McArdle said: “I’ll always be grateful to PACE for the start that they gave me on my journey to becoming an actor, not just the skills I learnt when acting but how to have confidence in myself and hold my own. It is a privilege to be able support them in their ambitions. I have experienced first-hand that theatre has the power to be life-changing and already, it’s clear that through this building PACE will be able to create even more opportunities for young people and their families. It’s still the happiest time of my life, I felt like I had a voice and was listened to at PACE even though I was young. It taught me I had value and worth which has been a vital part in becoming an actor but also just in growing up.”

The proposed model for the building model is inspired by young people focused buildings in England such as Unicorn Theatre, Polka Theatre, Chickenshed and Half Moon Theatre in London, Hullabaloo in Darlington, Contact in Manchester and Greenwich Young People’s Theatre.

Renfrewshire Council has already pledged an award of £300k from Renfrewshire’s £1.46m share of the Scottish Government’s £50m Town Centre Capital Fund – aimed at bringing vacant buildings back into use, improving infrastructure and supporting community-led regeneration.

Cllr Lisa-Marie Hughes, of Renfrewshire Council, added: “PACE Youth Theatre have been at the heart of the local area for more than three decades – in that time many thousands of young people’s lives having been enriched by that experience, and this new venue will open up those benefits to the next generation too.

“Of course, there is a long list of those young people for whom time spent at PACE was their springboard to stardom in the world of TV, film or theatre – and it’s great to see James McArdle coming back to where it all started for him to be part of this announcement today.

“Renfrewshire Council is putting culture at the heart of our plans to help transform the area’s fortunes, through the Future Paisley programme – which includes major investment in our own cultural venues such as Paisley Museum and Town Hall, as well as funding to help local creative groups like PACE grow.

“So we are delighted to have been able to make available funding, which will help PACE bring a long-term vacant building back into use and bring new footfall and vibrancy to the town centre.”

The award is a the first committed towards the project’s capital development total, expected to be in the region of £2.4 million, and PACE is actively seeking funding from sources to achieve this. Full details of the new building and ways to support the campaign can be found at www.exchangetheatre.org .